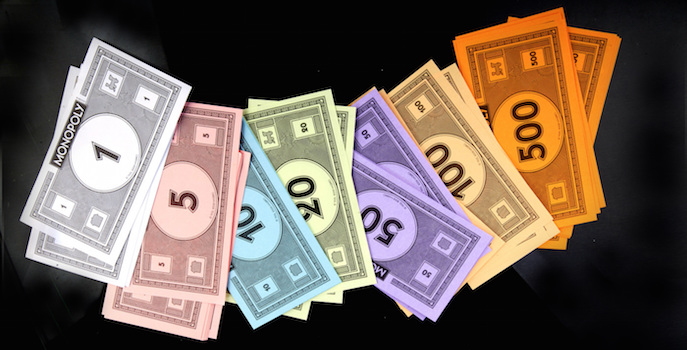 By 1941, two years into WWII, large numbers of British and Allied Airmen had been downed and captured behind enemy lines, held in Nazi POW camps. The Crown began casting about for ways to facilitate their escape.

Now obviously, one of the most helpful aids to that end would be accurate maps. But, paper maps had any number of drawbacks: they can be cumbersome; they make a lot of noise when you fold and unfold them; they wear out rapidly; and if they get wet, they become unreadable. So, MI-5 proposed the idea of printing maps on silk–durable, compressible, and silent.

At the time, the only British manufacturer that had perfected the technology of printing on silk was John Waddington, in Leeds. It just so happened that Waddington was also the UK Licensee for the popular board game, Monopoly. And, board games qualified for insertion into packages dispatched by the International Red Cross to prisoners of war.

In a securely guarded old workshop on the grounds of Waddington’s, a group of employees, sworn-to-secrecy, began mass-producing the escape maps. They were then folded and inserted into hollowed-out Monopoly playing tokens.

While they were at it, the clever workmen at Waddington’s added: a token, containing a small compass, others with screw-together parts for a metal file, and useful amounts of genuine high-denomination German and French currency, hidden in the piles of Monopoly money.

Before taking off on their missions, Allied air crews were taught how to identify the rigged Monopoly sets–by means of a tiny red dot, having the appearance of an ordinary printing glitch, located in the corner of the get-out-of-jail-free square. Of the estimated 35,000 Allied POWs who successfully escaped from Nazi captivity, more than a third succeeded with the aid of the rigged Monopoly sets.

RAF Commander Colin Alexander who led 31 fellow prisoners to freedom in 1943, said the Monopoly sets proved to be, “the Swiss army knives of the war.” Indeed, he said, “In the most unlikely of ways, they had afforded us every advantage for our every need.”